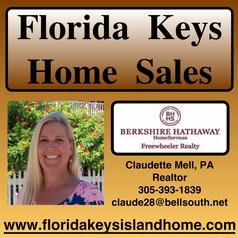 Florida Keys Environment: The Florida Keys are in the subtropics between 24 and 25 degrees north latitude. The climate and environment in the Florida Keys are closer to that of the Caribbean than the rest of Florida, though unlike the Caribbean's volcanic islands, the Florida Keys were built by plants and animals. The Upper Florida Keys islands are remnants of large coral reefs, which became fossilized and exposed as sea level declined. The Lower Florida Keys are composed of sandy-type accumulations of limestone grains produced by plants and marine organisms. The natural habitats of the Florida Keys are upland forests, inland wetlands and shoreline zones. Soil ranges from sand to marl to rich, decomposed leaf litter. In some places, "caprock" (the eroded surface of coral formations) covers the ground. Rain falling through leaf debris becomes acidic and dissolves holes in the limestone, where soil accumulates and trees root. The climate is tropical and the Florida Keys are the only frost-free place in Florida. There are two main "seasons": hot, wet, and humid from about June through October, and somewhat drier and cooler weather from November through May. Many plants grow slowly or go dormant in the dry season. Some native trees are deciduous, and drop their leaves in the winter or with spring winds. The Florida Keys have distinctive plant and animals species, some found nowhere else in America, as the Keys define the northern extent of their ranges. The climate also allows many imported plants to thrive. Nearly any houseplant known to commerce, and most landscape plants of the South, can thrive in the Florida Keys climate. Some exotic species which arrived as landscape plants now invade and threaten natural areas. The native flora of the Florida Keys is diverse, including both temperate families, such as maple, pine and oak, growing at the southern end of their ranges, and tropical families, including mahogany, gumbo limbo, stoppers, Jamaican dogwood, and many others, which grow only as far north as 25 or 26 degrees north latitude. Several plants that are popularly thought of as exemplifying Keys landscapes are in fact not native. These include coconut palm, bougainvillea, hibiscus, and papaya. The well-known and very sour Key lime (or Mexican lime) is a naturalized species, apparently introduced from the Yucatán Peninsula of Mexico, where it had previously been introduced from Malaysia by explorers from Spain. The tree grows vigorously and has thorns, and produces golf-ball-size yellow fruit which is particularly acidic and uniquely fragrant. Key lime pie gets its name from the fruit. The Florida Keys are also home to unique animal species, including the Key deer, protected by the National Key Deer Refuge, and the American crocodile. About 70 miles (110 km) west of Key West is Dry Tortugas National Park, one of the most isolated and therefore well-preserved in the world.

opportunities for your FUTURE in the Florida keys

Foreclosure is the legal and professional proceeding in which a mortgagee, or other lien holder, usually a lender, obtains a court ordered termination of a mortgagor's equitable right of redemption. Usually a lender obtains a security interest from a borrower who mortgages or pledges an asset like a house to secure the loan. If the borrower defaults and the lender tries to repossess the property, courts of equity can grant the borrower the equitable right of redemption if the borrower repays the debt. While this equitable right exists, the lender cannot be sure that it can successfully repossess the property, thus the lender seeks to foreclose the equitable right of redemption. Other lien holders can also foreclose the owner's right of redemption for other debts, such as for overdue taxes, unpaid contractors' bills or overdue homeowners' association dues or assessments. The Florida Keys foreclosure process as applied to residential mortgage loans is a bank or other secured creditor selling or repossessing a parcel of real property (immovable property) after the owner has failed to comply with an agreement between the lender and borrower called a "mortgage" or "deed of trust". Commonly, the violation of the mortgage is a default in payment of a promissory note, secured by a lien on the property. When the process is complete, the lender can sell the property and keep the proceeds to pay off its mortgage and any legal costs, and it is typically said that "the lender has foreclosed its mortgage or lien". If the promissory note was made with a recourse clause then if the sale does not bring enough to pay the existing balance of principal and fees the mortgagee can file a claim for a deficiency judgment. Types of Foreclosures The mortgage holder can usually initiate foreclosure at a time specified in the mortgage documents, typically some period of time after a default condition occurs. Within the United States, Canada and many other countries, several types of foreclosure exist. Two of them – namely, by judicial sale and by power of sale – are widely used, but other modes of foreclosure are also possible in a few states. Foreclosure by judicial sale, more commonly known as Judicial Foreclosure, is available in every state and required in many, involves the sale of the mortgaged property under the supervision of a court, with the proceeds going first to satisfy the mortgage; then other lien holders; and, finally, the mortgagor/borrower if any proceeds are left. As with all other legal actions, all parties must be notified of the foreclosure, but notification requirements vary significantly from state to state. A judicial decision is announced after pleadings at a (usually short) hearing in a state or local court. In some fairly rare instances, foreclosures are filed in Federal courts. Foreclosure by power of sale, which is also allowed by many states if a power of sale clause is included in the mortgage or if a Deed of trust was used instead of a mortgage. In some states so-called mortgages are actually deeds of trust. This process involves the sale of the property by the mortgage holder without court supervision. It is generally more expedient than foreclosure by judicial sale. As in judicial sale, the mortgage holder and other lien holders are respectively first and second claimants to the proceeds from the sale. Other types of foreclosure are considered minor because of their limited availability. Under strict foreclosure, which is available in a few states including Connecticut, New Hampshire and Vermont, suit is brought by the mortgagee and if successful, a court orders the defaulted mortgagor to pay the mortgage within a specified period of time. Should the mortgagor fail to do so, the mortgage holder gains the title to the property with no obligation to sell it. This type of foreclosure is generally available only when the value of the property is less than the debt ("under water"). Historically, strict foreclosure was the original method of foreclosure.